Pixidust project - reciprocating audio/visual music using modular synthesis and PixiVisor software
JavaScript is disabled for your browser. Some features of this site may not work without it. 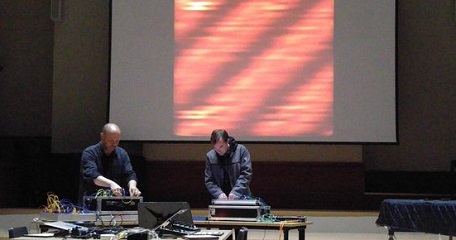 The Pixidust project involves a series of improvisations using modular synthesisers (and acoustic instruments) together with PixiVisor software. The recordings took place at the Reid School of Music Reid Concert Hall, Studios and elsewhere at the University of Edinburgh in May - June 2017 and involve performances with Yati Durant, Jules Rawlinson and Ensemble Biondi/Brunialti. The techniques used in this project experiment with implementation of Pixivisor audio/video translation software that create a visual feed-forward link to supplement ex-musical communication in the improvisational process. The recordings are audio-only form, but the exact PixiVisor visuals used in the performance can be precisely recreated by playing the recordings back through a system using PixiVisor software, thereby making the outputs simultaneously valid as audio AND visual information material. The datasets include information and short explanations of methods experiments with during the sessions.

See other work by Yati Durant in the Spontaneous Compositions Collection project.