Intraplate volcanism in Eastern Australia, the Tasman Sea, and Coral Sea
JavaScript is disabled for your browser. Some features of this site may not work without it. 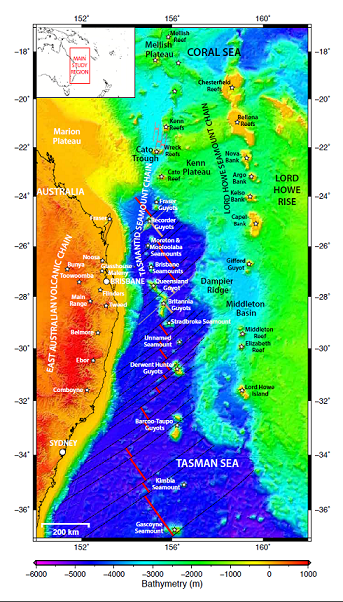 Although plate tectonics provides a clear mechanism for volcanism near plate boundaries, the variety and complexity of intraplate volcanism remains enigmatic. This project focuses on the intraplate volcanism of Eastern Australia and the Tasman and Coral Seas, which includes three volcanic chains, the East Australian Central Volcanoes, Tasmantid Seamounts, and Lord Howe Seamounts, as well as distributed continental ‘lava field’ volcanism with no apparent age progression. The three chains are long-lived and age-progressive — classically considered strong indicators of a deep plume source — but are also contemporaneous and sub-parallel. This project aims to address the mechanisms behind this unusual pattern of volcanism; the relationship between the chains, the lava fields, and the Louisiade Plateau; and the interaction between deeper mantle upwelling and shallower features such as topography on the lithosphere-asthenosphere boundary and the extinct Tasman Sea spreading centre.