The documentation of Ambel, an Austronesian language of eastern Indonesia
JavaScript is disabled for your browser. Some features of this site may not work without it.

The documentation of Ambel, an Austronesian language of eastern Indonesia 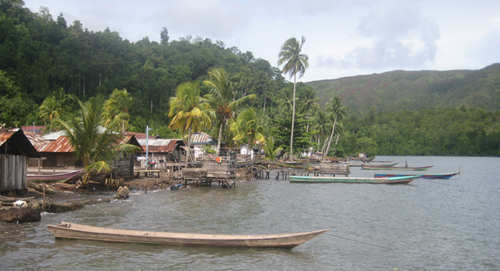 This collection is an audio-visual documentation of Ambel. Ambel is an endangered language with around 1000 speakers. It is spoken in the Raja Ampat archipelago in West Papua province, Indonesia. Genetically it is an Austronesian language, of the South Halmahera-West New Guinea branch. However, like many of the Austronesian languages of Papua, it shows evidence of prolonged and intense contact with non-Austronesian languages, such as a complex prosodic system, extensive person-number marking on the verb, and many words with a non-Austronesian origin.

The corpus includes material from both male and female speakers, from a range of age groups.

Each item contains an audio recording (.wav), which is accompanied by transcription, translation, and morphological glossing in an Elan file. Some of the items also contain a video recording (.mpeg4), and/or supplementary photographic data. In addition, included are a scan of the accompanying field notes, a metadata file, the consent form, and further information about the speaker's language background.

This project is supported financially by the Hans Rausing Endangered Languages Documentation Programme, the AHRC, and the University of Edinburgh.

This project is carried out in collaboration with the Center for Endangered Languages Documentation at Universitas Negeri Papua, Manokwari.