Improvising Duos project
JavaScript is disabled for your browser. Some features of this site may not work without it. 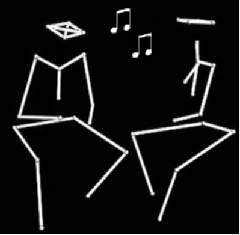 The data include multimedia and numerical data generated for the Improvising Duos project, a collaborative research project funded through awards from The Carnegie Trust for the Universities of Scotland (www.carnegie-trust.org), and British Academy Small Grant No. SG102542 (www.britac.ac.uk). The project was facilitated by the technical resources of the Music Cognition and Action research group, Max Planck Institute for Human Cognitive and Brain Sciences, Leipzig, in collaboration with Dr Peter E. Keller (The MARCS Institute, Music Cognition and Action Group, University of Western Sydney, Australia).

The collection includes short audio-visual displays of improvising musician duos. The clips include sections of music where just one of the musicians is soloing and the other is listening: not at that moment playing their own instrument, but about to begin playing again very shortly. The musicians' movements were recorded with optical 3D motion-capture technology. The point-light displays are rendered in these excerpts as stickmen actors. The excerpts were used as stimuli in a perceptual study. Half of the movie clips showed 'real' musician duos, while the other half showed 'fake' pairings where one soloist was matched with a listener musician from a different duo.