Spontaneous Compositions for Screen project
JavaScript is disabled for your browser. Some features of this site may not work without it. 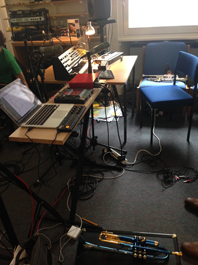 The Spontaneous Compositions for Screen project involves a series of compositional performance experiments utilising new methods of improvisation to, and influenced by, film and/or video. The performances have been taking place at the Reid School of Music, involving Yati Durant, Christian Aalby Svalesen, Jack Weir and others, and are electro-acoustic in nature. Many of the performances experiment with new forms of electronic controllers, musical communication and involve various levels of content discussion (or none) before the takes. These datasets include performances with as well as without video (prior to implementation with video), as well as short explanations of methods experimented with.

See other work by Yati Durant in the Pixidust project.